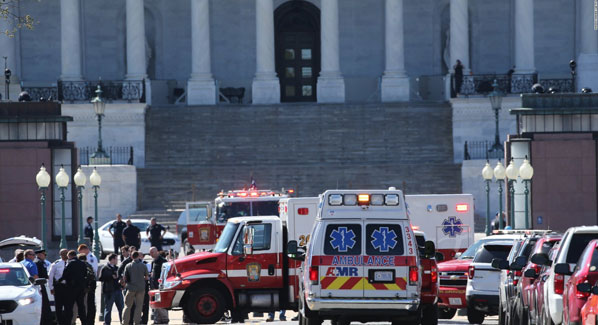 WASHINGTON, D.C. (SatireWire.com) — House Speaker Paul Ryan was rushed to a hospital today after negotiations over House and Senate tax reform bills caused him to experience an erection lasting longer than four hours.
Ryan, the Wisconsin Republican noted as a tax and budget wonk, was taken to Bethesda Naval Hospital, where officials described his condition as, “too stable, if you know what I mean.”
Members of the House and Senate were meeting to work differences between two versions of tax reform when the Speaker’s priapic episode became obvious. Though not finalized, the legislation will cut corporate taxes, alter individual tax brackets, and add $1 trillion to the national debt.
An ambulance was called to the Hart Office Building at 4:50 p.m., where finance committee members had been meeting for seven hours. According to Sen. Chuck Grassley (R-IA), the discussions had just touched on deductions for pass-through entities when the Speaker suddenly rose from his chair.
“That’s the thing, he rose from his chair, but he was still sitting, if you catch my drift,” said Grassley. ““His face was flush and his teeth were bared and the veins in his neck were bulging. We said, ‘Paul, how long have you been like that?’ and he just started whimpering, ‘Help me.’”
Colleagues attempted to come to his aid by changing the subject to golf, but Ryan immediately starting citing section 501(c)(6) of the tax code that gives the PGA Tour tax exempt status, and the problem grew. Desperate, one staffer called the White House to ask if President Donald Trump could sign the bill immediately, hoping the climax would bring Ryan down. But others pointed out the legislation wasn’t ready.
“In retrospect, I should not have said, ‘Wait, we haven’t begun reconciling the deduction on the repatriation of offshore income,” said House Finance Committee Chairman Jeb Hensarling (R-TX). “That just made Paul even more… enthusiastic.”
Witnesses said Ryan eventually curled up in a slightly oblong ball on the floor and kept mumbling, ‘God bless America, God bless America.’
“I think that’s his safe word or something,” Hensarling said.
A Ryan spokesman said the Congressman should be back at work in a few days, but cautioned people not to mention tax legislation around the Speaker.
“Paul gets off on numbers and taxes like nobody else, and these last few weeks, with his pet legislation finally coming to fruition, he’s been like a kid in a candy shop,” said Jonathan Burks, Ryan’s Chief of Staff. “Although if he were in a candy shop, you’d probably want to usher him out the back as it wouldn’t be good for the children to see.”
© 2017 SatireWire.com