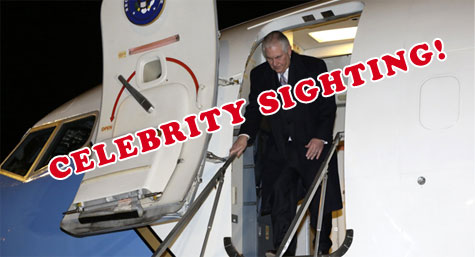 TOKYO (SatireWire.com) – Reclusive CEO-turned-Secretary-of-State Rex Tillerson has been spotted in Asia cozying up with Japanese leaders, according to close friends who say the oil industry heartthrob is there for super-secret meetings. Quel mystérieux!
Asked what the ascetic silver fox is doing in Japan, and who he’s visiting with, and if in fact he’s even in the Far East, the U.S. State Department issued a flirty, “No comment!” so you have to assume it’s true!
One thing we do know is the elusive 64-year-old – who turns the big 6-5 next week, ladies! – arrived in a small plane and refused to take the State Department press corps with him, which confidantes say is no surprise.

“Rex really isn’t comfortable in the spotlight,” says a childhood pal. “Or being photographed or spoken about or explaining himself to anyone.”
That’s just one of the things that makes the isolated envoy so alluring, offers another inside source.
“He is such a hot mystery,” the source says. “Everyone wants to know, who is Rex Tillerson? What does he do? Why is he Secretary of State? You know they say, ‘You always want what you can’t have,’ and Rex really doesn’t given you anything.
“Anything at all,” the source adds.
So what’s up with Asia? Rumor has it the former head of Exxon will be getting his dialogue on with Japanese Prime Minister Shinzo Abe, or ‘T-Abe’ as some are calling the pair. And look out Beijing – sexy Rexy will be there Saturday, according to someone who has access to the Secretary’s agenda and therefore is not in the media. Confidantes say the diplomatic Don Juan and Chinese President Xi Jinping (already dubbed RexXi) will be talking about North Korea, trade, and some islands in the South China sea.
Does that mean the power-duo will be buying an oceanfront rendezvous-with-a-view together? We asked the State Department, and all they would say was, “No comment!” So you have to assume it’s true!
© 2017 SatireWire.com