Skip to content
Home Sports POLL: 90% OF NFL WOULD LET GAY PLAYER FUCK THEM IF IT MEANS WINS

NEW YORK,  NY (SatireWire.com) — In a new poll that belies the perception that pro football is homophobic, more 90 percent of NFL players said they would let a gay teammate fuck them if it helped them win the Super Bowl.


The survey follows Sunday’s historic announcement by University of Missouri All-American Michael Sam that he is gay. While some have speculated the proclamation will hurt the 6’2?, 260-pound defensive end’s status in the upcoming NFL draft, the poll, and the players, suggest otherwise.

“This league isn’t about prejudice or intolerance or discrimination, it’s only about one thing: winning,” said Philadelphia Eagles all-pro lineman Jason Peters. “And if winning means I have to get banged in the behind by a gay teammate who can help us win, then that’s what I’m going to do.”
“What matters to us isn’t where you come from or who you love, but can you bring it?” added said New York Giants quarterback Eli Manning. “If this guy can help us get back to the Super Bowl, he can get on my back anytime he wants. But if it’s just the playoffs, I’ll probably stop at oral sex.”
Made aware of the poll, Sam insisted he has no interest in sexual relations with any of his prospective teammates, and noted that assuming he does is a form of bigotry in itself. In response, NFL players scoffed.

Denver Broncos center Manny Ramirez, meanwhile, said Sam’s strength and quickness might be just what his team needs to return to the championship game and help them forget an embarrassing loss to Seattle.

“I’m not saying I’d like it, but if it got me a ring, I’d let him do it,” said Ramirez. “I mean, in the Super Bowl, our whole team got fucked by the Seahawks. It can’t be any worse than that.” 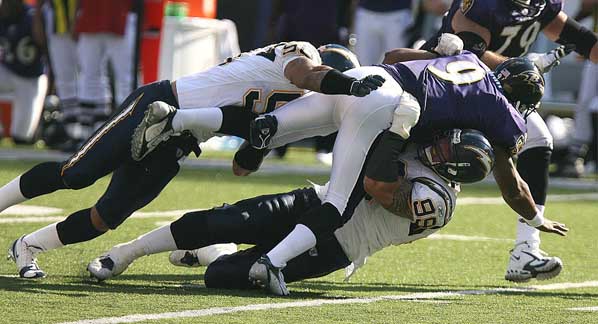